Researched and compiled by Joan Green 2009

A group of men who preferred sailing to motor craft broke away from the Oakland County Boat Club on Sylvan Lake where motor boats predominated. This small group of sailors wanted a family-type club away from the noise and smell of motorized boats. Twenty-two sailors met early in 1934 in DeVere Hollenbeck’s home in Bloomfield Hills to talk about the formation of a sailing club. In addition to Hollenbeck, Roy Connolly, Charlie Callahan, Henry St. John, Harold Cousins, Fritz Schroder, Herman Laarz, Herbert Winges, Alvin Winges, Albert James and others discussed this new club.

These men decided to incorporate as the Pontiac Yacht Club, for Sailing Craft Exclusively. The caretaker’s quarters of the Cass-Sylvan community house at the lower end of Cass Lake was rented for $50 per year. The “club-house” was only 12 by 16 feet, but served as the center of activities for two years. An old barge which Roy Connolly bought from Dodge Park was used as a starting boat.  Our first commodore was Shirley Bomhardt. The fleet was made up of fourteen boats of many descriptions. Legend has it that a few members, tiring during a Sunday race, would stop at a lakeshore tavern for beer and entertainment by a three-piece German band. 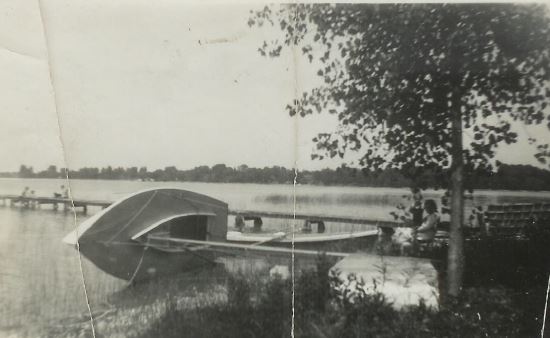 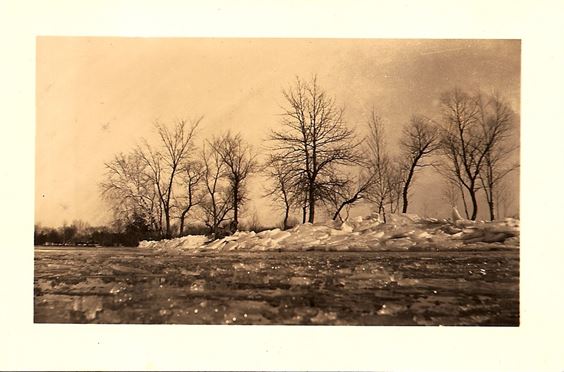 Wards Point in the Winter

For the Club’s second year, Roy Connolly was elected commodore. Those not in agreement with the ideals of the new club found their way back to Sylvan Lake. Other new enthusiastic sailors were added to the club, including Milo McLintoch and “Shipwreck” Kelly who taught sailing. It was decided more spacious quarters were needed.

The point area just across the bay from the present clubhouse was rented from Caleb Sommers and Joe Ward. Roy Connolly was re-elected commodore. A knock-down imitation log cabin measuring 22’ by 24’ was purchased from the Alladin Company in Bay City for $400 and set up just west of the point. Here the club had 150 feet of brush and snake filled swamp. A dock, somewhat over twenty feet long, was built. The fleet, some sixteen boats, half of which were Snipes, was moored in the bay. Scrap iron from local yards was used for mooring buoys in lieu of anchors. A large, white, mine-net ball, survivor of World War I days, served as starting marker on the shallows opposite the point.

This was quite a glorious era for PYC. Members and families were always dressed in their best sailing togs. Nothing but freshly starched white ducks and well-scrubbed white shoes were considered proper for skippers. An extra pair of ducks was kept handy in case of an accidental dunking. Docks and boats were kept spotless. Swabbing down the deck was as much a part of pre-sailing ritual as hoisting the mainsail. Sunday morning inspections became routine. Dues were low, there was no indebtedness or expensive overhead. Slowly and cautiously new members were added: George Wasserberger, Buell Starr, Alex Clark, Al Gray, Les Huntwork and others. 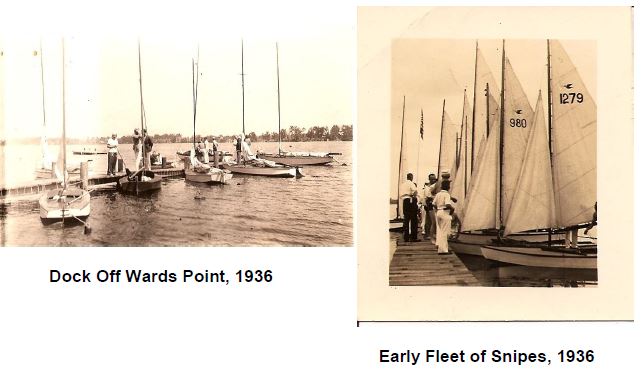 There was a feeling among the members that the club should have a more permanent location and one that it owned. Also, the area was being sub-divided and there was opposition to a boat club on the point. So it was in the fall of 1937, while Harold Cousins was commodore, that an option was taken on 300 feet of Cass Lake frontage at $10 per foot. The bay was a natural harbor, protecting it from all winds except those coming from the north to northeast. The bathing beach was solid sand.  A clubhouse could be constructed on high ground well above the lake level and the land between the club house location and the road was clear of brush and trees. Some property owners did not want the yacht club to purchase this land and, since the restrictions required unanimous agreement of the residents, an agent was hired to obtain their signatures. He was successful, perhaps only on the basis that the club would make a proper buffer between residential homes and the trailer park already in its present location.

At the time the club acquired its property from Caleb Sommers, the members agreed, honoring Sommers’ request, not to serve or have liquor on the premises. After the purchase of the land, a succession of work parties followed. The land had to be cleared. Trees and stumps were piled on the frozen lake and burned, after many unsuccessful attempts, then with the help of much gasoline. The clubhouse was eased from its footings, engineered across the ice (actually rolled on logs) from the point, and dragged up the hill to about the location of the present ladies locker room. Due to the slope of the ground, front steps were constructed. A partition was erected down the middle of the 22 X 24 clubhouse, too high for “peeping toms” but low enough to be interesting. 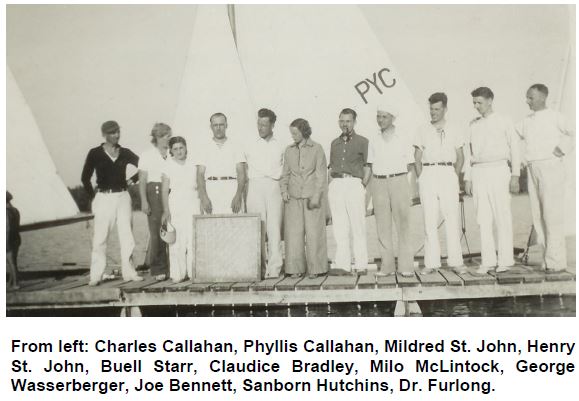 Buell Starr was elected commodore. A well was driven by hand in the spring with C.K. Patterson taking a leading part. A dock was built from a surplus scrub-oak fence and telephone poles. The oak was so tough that hardly a nail penetrated and at the end of the summer the supports had become so water-logged that they could barely be moved.

Harold Cousins was elected commodore for a second time in 1939 and Roy Connolly for a third time in 1940. Many new members were admitted and the number of boats increased to capacity. Dues were $10 for non-voting members and $15 for voting members. No member with unpaid dues was permitted to put his boat in the water. Wives and girl friends of the members added sociability to the club, but crews for the most part were made up of men. Many boats were stored in Harold Cousins’ father’s garage where tools were handy. Mr. William Cousins was presented with an honorary membership for all his help.

Charlie Callahan, top point getter for the season in his Snipe, was invited to the Clearwater Yacht Club (Florida) for their regatta in February. It is unknown whether he packed up that Snipe and his family and headed south.

Races were handicapped and started opposite Ward’s Point. The race committee had many starting boats: Roy Connolly’s out-board row boat, a thirty foot sand scow, a twelve by twenty foot house boat, a three sectioned catamaran, a cruiser, a non-descript one-lung craft fished out of the Clinton River by Al Gray called the Graf Spee, a plywood-hulled work boat, and finally a Welin steel boat purchased in 1953.

Buell Starr, Charlie Callahan and Henry St.John divided most of the trophies in the Snipe class. In the open class, Patterson’s catboat “Tempest”, Connolly’s “Alibi”, McClean’s “Suicide” and Cousins’ “Rascal” were usually in the hardware. Always managing to get home were Joe Bennett, Milo McLintoch, and George Wasserberger.

The fleet was made up of a number of different kinds of boats with Snipes predominating. Some members thought the club should concentrate on a larger, class boat which could accommodate more people for pleasure and day sailing and yet be fast and sporty for racing. Alex Clark and Al Dibble brought in two “Downeasters” which led to the club’s attempting unsuccessfully to arrange a deal with the builders for a fleet purchase. Then a new design was demonstrated at the club by a manufacturer’s representative… a “Lightning”. Almost everyone liked it. Club members had the use of Carl Marr’s father’s boat, and shortly thereafter (In 1941), six were ordered from the Skaneateles Boat Company.

In 1940, it was decided to build a permanent clubhouse. Ways and means of raising money were considered. Shares of stock, at $50 per share, were issued by the club and purchased by members either in cash or by work. Dudley Blakely, an architect with Cranbrook Institute, was encouraged to draw plans adequate for the needs of the members, inconspicuous from the road, and following the motif of a ship with port and starboard running lights as well as a railed bridge deck. 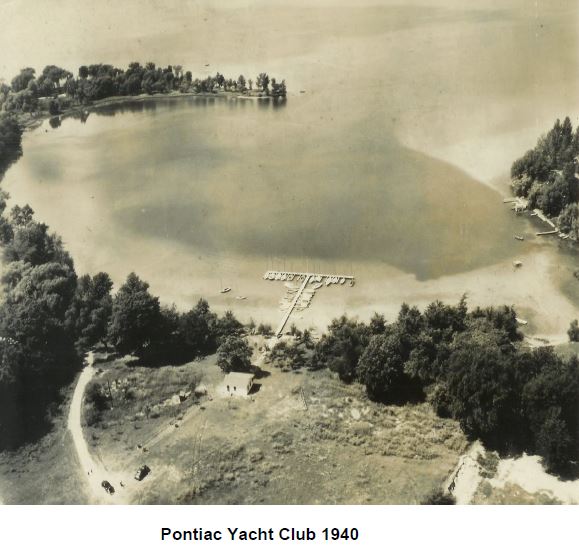 The plans for the new club house were ready in 1942. The original log house was sold and every possible money-saving angle exploited. No structure was ever built with so little cash and so much persuasion, friendship, and teamwork on the part of the members. The foundation was dug by a friend of Harold Cousins. The cement blocks were bought through Holly Hollenbeck but laid by a professional with help from members. Al Gray primed the cinder blocks for painting. He also dug the trenches for the pipes to the septic system. Wiring and plumbing were done by DeVere Hollenbeck and Les Huntwork.

The picture window was a gift from Booth Foundation, thanks again to DeVere Hollenbeck. Lockers were donated by McLouth Steel Company. Ray Ransom, with some amateur help, did much of the carpentry and finishing. Harold Cousins supervised the foundation of the fireplace and swore that he personally used a bedspring together with fifty feet of cable as reinforcement. With all this cooperation, the work proceeded rapidly. The shell was completed in 1942 and the finished clubhouse was ready for use in the summer of 1943. 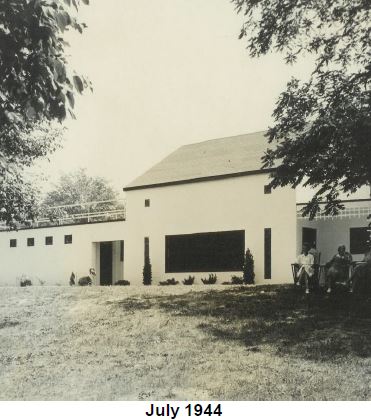 The dues for 1942 were $10 plus a $5 assessment for labor and materials. 20% was added for taxes to the government totaling $18.  Dockage was $5 for any boat moored at the dock or on the club grounds for the summer. New members paid $108 plus dockage if they had a boat. Extra contributions were always welcome.

The club needed a good wide hand mower and a donation was requested. The board of directors approved the hiring of a man for our general work.

On Sunday, May 24, 1942, the members were asked to bring a shrub or tree to be planted on club grounds. Members with hip boots and waders were needed to complete the inside “T” of the dock.

In 1942 Henry St John, secretary, wrote in the Pontiac Yacht Club News,   “Spring is here again. Some feel that any pleasure is in bad taste in this war period, and that one should sit at home and brood in the ills that beset the world. But, how about our morale and health?  We’ve got the water and four acres of ground. No vital priority elements are needed with a sailboat. Soak up the warm sunshine and use your brain and muscle to build up your resistance this summer. In these times, we must all live from day to day and get what pleasure we can, while we can.”

Henry also wrote, “The club should be enjoyed to a further extent this year (more) than ever before, as it should provide recreation and relaxation from the long, hard-working days each and every member is putting in at his work to bring victory to the United Nations in order that we may continue to enjoy forever the freedom and privileges which we of this great United States now enjoy.” 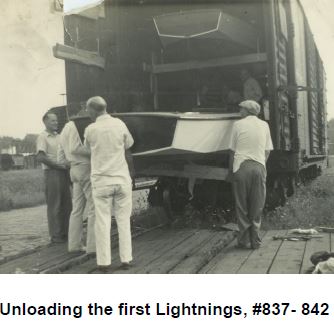 The brightest spot during these war years came in 1942 when the six Lightnings, ordered in 1941 arrived by railcar from Skaneateles, New York. This was the beginning of Fleet #54 and what was to become the largest Lightning fleet at one mooring in the world. 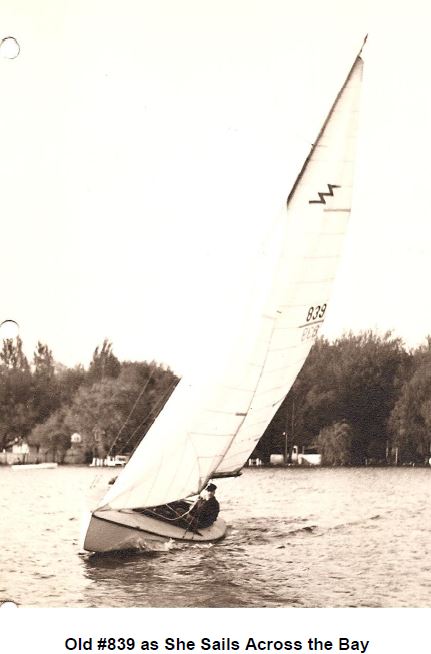